WHAT ARE SILICONE RELEASE LINERS? Silicone Release Liners are an essential part of many ‘sticky’ or self-adhesive products. The Release Liner performs a number of essential roles in protecting and supporting self-adhesive materials, allowing their subsequent processing (such as die-cutting), before finally ‘releasing’ the self-adhesive material to be used their final application. The most common applications are for self-adhesive labels and tapes where there often needs to be a protective liner, but release liners are also used in a wide range of other applications where the applied material is only ‘sticky’ for a specific part of the process (such as in composite release liners). 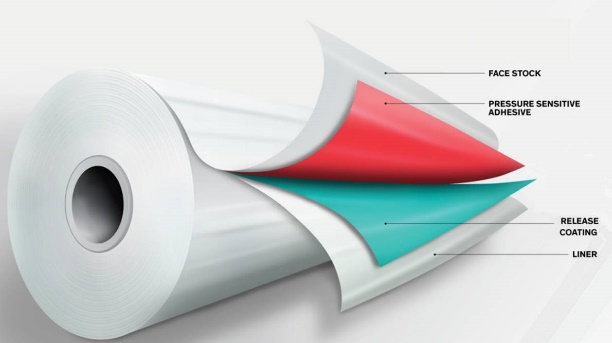 WHAT IS SILICONE MIGRATION? The silicone release coating is a very thin layer of an elastomeric silicone rubber on the surface of the release liner. The silicone needs to be applied as a liquid, before being crosslinked to form the final silicone elastomer. They can be applied as solvent dispersions, water-based emulsions, or (most commonly) as a mixture of silicone fluids referred to as ‘solventless silicone coatings’. Regardless of the physical form they all need to be crosslinked to form the final silicone elastomer using heat or UV radiation.

The release coatings are designed such that all of the polymers will crosslink to form the final elastomeric coating, but there is always the risk that there might be a small proportion of unreacted silicone polymers present in the final release coating (either because they did not successfully react into the elastomer, or because they lack the functional groups which enable them to react into the silicone elastomer).
The presence of these unreacted silicone polymers in the final release coating means that there is a potential risk of them migrating beyond coating. Typically, such migration would initially be to the silicone surface and then from there, migration onto and into the material in contact with the silicone such as the Pressure Sensitive Adhesive (PSA), or the base substrate.

In order to better understand and characterize the level of silicone migration from a release liner and the subsequent impact this migration could have, a series of studies were completed under the leadership of IFAM (Fraunhofer Institute). Their initial evaluations on typical, well crosslinked, silicone release liners showed that for such ‘well-crosslinked’ release coatings(ref 1,2&3), only very low levels of silicone migration could be expected (equivalent to 5-10% of the contaminated surface covered). Only where level of crosslinking was demonstrably lower could there be more significant levels of contamination. 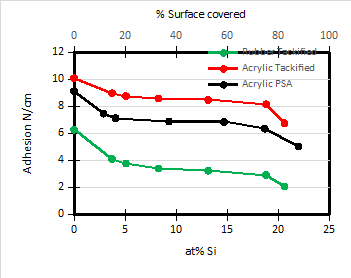 WETTING - As a further step, the study also included evaluations on the impact of silicone migration on ‘wetting’ of materials (such as paints/lacquers and printing inks), to contaminated surfaces. This included evaluation of the coating performance of a water based automotive lacquer (same as had been used for adhesion testing), onto metal surfaces contaminated with silicone. The metal surface was a standard corrosion treated surface (KTL-steel), and the visible ‘coating defects’ were assessed in terms of number and size. The results showed that even at quite low levels of silicone contamination (>20% surface coverage), there was evidence of ‘coating defects’ for the most ‘sensitive’ lacquers, although at the very low levels of surface contamination (around 10%), there were no defects.

SUMMARY & CONCLUSIONS - Migration of silicone species from silicone release liner is always a possibility where the silicone coating is brought into contact with other surfaces. Even if completely crosslinked there is always the chance of some migration of silicone species. What this work has highlighted, though, is that under normal circumstances, with a well crosslinked release liner, such low levels of silicone migration should not be enough to have an impact on the subsequent performance of the materials involved. In terms of the impact on adhesion performance, only a very high level of silicone migration could have any significant

impact which could only occur where the release coating had not been sufficiently crosslinked. In terms of the impact on ‘wetting’ defects it was evident that silicone migration was more of a concern and showed an impact at much lower levels, but even here, provided that the level of crosslinking of the silicone release coating was sufficient, there should still not be any significant impact.
The overall conclusion is that provided the level of silicone crosslinking is sufficient (equivalent to a silicone ‘extractables’ level of less than 3%), there should be no significant impact on either ‘adhesion or ‘wetting’ of materials that come into contact with the silicone release liners.

An improving picture for the recycling of release liners, although removing further barriers would maximize the opportunity

Recycling options for both papers and films

While siliconized films can be simply re-ground and granulated to offer a PET or polypropylene (PP) feedstock for reuse as release film or downcycled applications, release papers seem, at first glance, to be more challenging because the papers are silicone coated and the silicone has to be removed before re-using the cellulose fibres. However, the paper can be pulped and, with a chemical treatment similar to that used for newsprint, the silicones can be released and separated through a flotation process, leaving the high quality fibre to be recycled into a choice of paper products from release liners to label facings or other graphical papers.

Overall, paper recycling is one of the most efficient recycling processes with paper and board outstripping rates for other basic materials.

However, on average, the fibre can only be recycled between 3-4 times before its integrity is lost, leaving a theoretical maximum sustainable recycling rate of ~79%.

While the technical criteria are well-established, the fact that siliconized papers require special treatment means that there needs to be a concentrated supply to feed the process. Where this is the case, the operation can be cost neutral with the profit margin being created by avoided waste disposal costs. This can be a particularly important in Europe where charges can be quite significant. 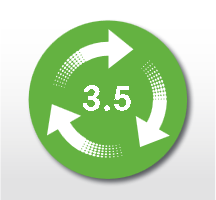 However, as soon as supplies are geographically scattered, the costs of collection can become prohibitive. As a result, the main investment opportunities focus around facilities where significant volumes of release papers are available.

As an example, Henkel partnered with UPM in 2016 to recycle more than 400 tonnes of siliconized glassine label liner waste at its Wassertrüdingen facility in Germany. This represented around 20 truck loads of liner waste. More recently, Techlan, a company based in South Wales, received the first grant awarded from the £6.5 million Circular Economy Fund, set up in South Wales by the Welsh Assembly. The grant is claimed to make it possible for Techlan to double its capacity in the recycling of Waste Release Liner and provide a wider range of product sizes to the market. The basis for the Techlan success in Swansea is the access that it has to release liners used for the manufacture of pre-impregnated composites in the locality.

There has been a long-standing discussion within the release liner industry about the colour of release papers. Some of those specifying believe that darker colours – particularly shades of brown are more forgiving than white products. However, this creates a challenge in that darker papers, when mixed with white sources tend to visually degrade the recycled products leading to a loss of value in the recycled material. This in turn, can tip the balance of the underlying economics and reduce the attractiveness of the recycling option. Although the pulp can be bleached, this adds a further process step and associated cost. It also adds to the chemical footprint which is, by definition, less sustainable. The other alternative is to seek to sort the waste into its respective colours, but this also adds a handling step with its associated costs

The IRLA membership is keen to see as high a level of standardization as possible to maximize the possibilities for economic recycling. With the European Commission now moving into the second phase of its Circular Economy Action Plan, the main initiative relating to paper recycling is covered under the ‘ImpactPaperEC’ initiative which is seeking to promote best practice on paper recycling. IRLA wants to be sure that release paper recycling plays its part in fulfilling these objectives.